DISSERTATION RESEARCH: Endemic species of Gordonia (Theaceae) as a model to understand plant diversity and biogeography in Sri Lanka 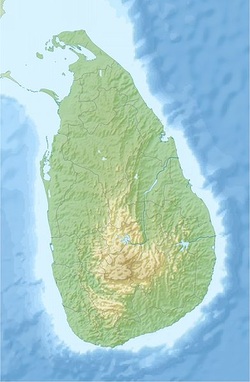 Sri Lanka is rich in biodiversity and home to a large number of endemic species, with nearly 30% of the angiosperms and 40% of vertebrate species endemic to the island. As a result, it has been named a biodiversity hotspot. However, the number of studies that have looked into the evolutionary history of these endemic species is surprisingly few. Most have focused on the fauna with hardly any for the flora. As a result, there is a huge void of biogeographic and evolutionary data available for plant species in this hotspot. I proposed to use endemic species in the plant genus Gordonia (Theaceae) to study patterns of biodiversity and the biogeography in Sri Lanka.  Specific goals are 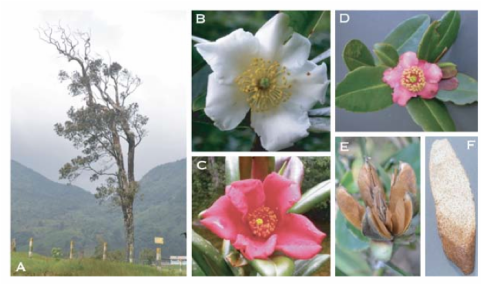 Gordonia in Sri Lanka. A. Habit of G.ceylanica. B-D. Flowers of G. elliptica, G. speciosa, and G. dassanayakei. E. G.ceylanica Capsular fruit at dehiscence. F. Winged seed of G.brenesii. Photo credit: A. Gunathilake (A &F), D. Yakandawala (B, C, & D), P. Karunathilake (E)
There are four species of Gordonia s.l. in Sri Lanka according to the recent revision of the Flora of Ceylon (i.e., Sri Lanka), all endemic to the island: G. ceylanica, G. dassanayakei, G. elliptica, and G. speciosa.  However, questions have been raised on the recognition of these species.  G. ceylanica was the first species to be described in 1840 by Wight.  G. elliptica and G. speciosa were later described by Gardner in 1847.  In 1858, the number of species was reduced when Thwaites subsumed G. elliptica into G. ceylanica as a variety, in his comprehensive work Enumeratio Plantarum Zeylaniae.  The fourth species, G. dassanayakei was described in 1996, in the Flora of Ceylon, based on its unusual flower color.  All species of Gordonia in Sri Lanka are restricted to montane areas, reflecting the distribution of the majority of endemic species on the island.  It is not uncommon to find sympatric populations of two or more species (pers. obs.), and the total number of sites where any species can be found in Sri Lanka is fewer than 20.  Gordonia speciosa is known from only from a very few sites, the three remaining species are more widely distributed within the southern highlands.  Results of a morphological cladistic analysis with multiple individuals of Sri Lankan Gordonia found only two of the four species (G. dassanayakei and G. speciosa) were monophyletic, as currently circumscribed.  These results call into question the current recognition of four species in Sri Lanka and provide a hypothesis that can now be tested using genetic data.